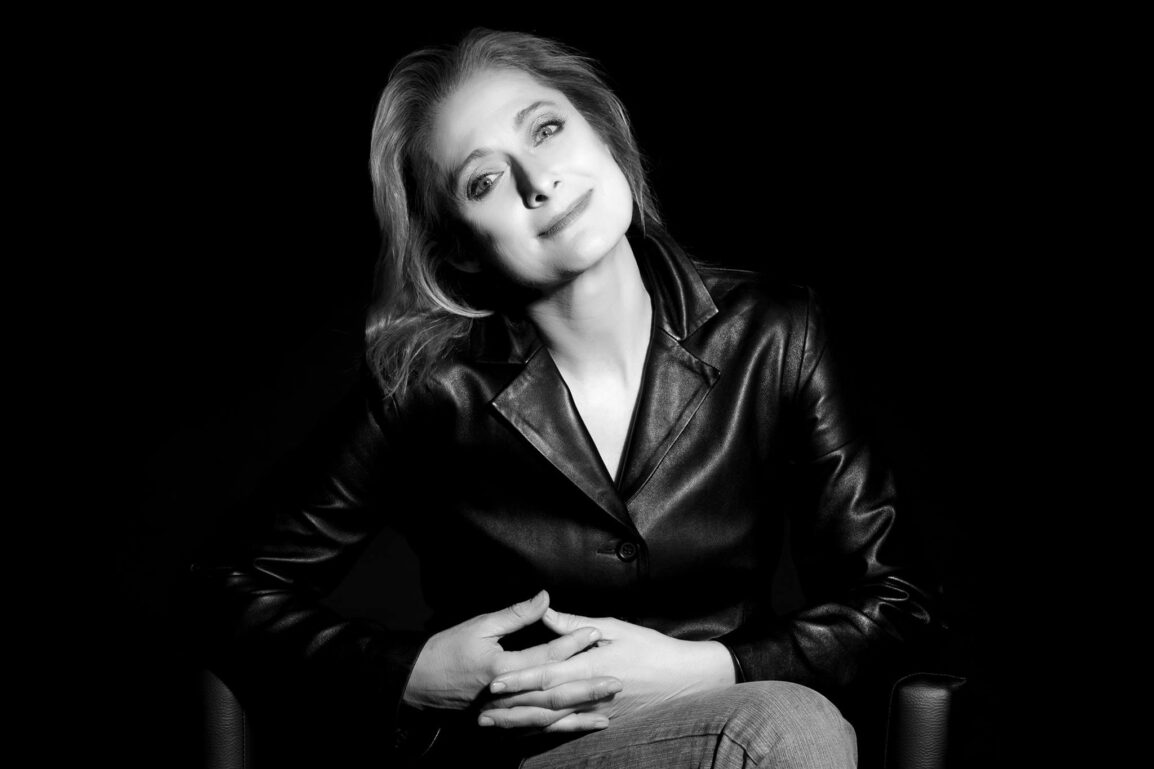 ´60 years and not a bit wise´, sang the German-Austrian actor Curd Jürgens in 1975, who was nicknamed “Norman closet” by Brigitte Bardot during the shooting of Et Dieu… créa la femme (1956) due to his stately statue and cool charisma. With Caroline Goodall it has to be: ’61 years and new rise.’ The muse of Steven Spielberg, who appears in two of his masterpieces as the wife of the main actor (in Hook it was 1991 Robin Williams, in Schindler’s List 1993 Liam Neeson), is now breaking new ground in the film business behind the camera: In the positively old-fashioned mystery thriller They Bay of Silence, she not only wrote the script, but also acts as a producer.
So it is never too late for a change of direction, a new upswing! Caroline Goodall is the first guest of honour of the JETS initiative, which this time takes place exclusively online due to the COVID-19 pandemic in 2021. Her adaptation of Lisa St Aubin de Teráns´ novel, published in 1987 with prominent cast (Claes Bang, Olga Kurylenko and Brian Cox,) is in the best tradition of Alfred Hitchcock and Roman Polanski: For the staging she was able to hire director Paula van der Oest from the Netherlands, who is specialised in sensual and mysterious melodramas (2001 Academy Award nomination in the category ’Best Foreign Language Film’ for Zus & Zo). Despite a strong Olga Kurylenko and subtly incorporated #MeToo references, Caroline Goodall does not see The Bay of Silence as a pure ’women’s film’ because the story of the death of her son is told from the point of view of the long unsuspecting father Claes Bang. She would like to introduce the elaborate independent production to the participants on the second JETS day, but of course also speak about her connection to the probably internationally unique initiative, which recognises film projects worthy of funding even before they open in theatres and facilitates contact between filmmakers and co-production partners in other countries.
Caroline Goodall was born in London on November 13, 1959 (she shares by the way her birthday with the Viennese genius actor Oskar Werner with a difference of 37 years). The holder of a dual citizenship is the daughter of a publisher and a writer, who were both of Australian descent. And she is also a JETS child. She met JETS CEO and WEP Productions founder William Peschek through her long-time actor friend and JETS winner Shelagh McLeod, who, celebrated her directorial debut Astronaut (title role another Steven Spielberg legend: Richard Dreyfuss) last year at the age of 59. Caroline Goodall is already full of praise for him and the event: ’JETS may be known as a Junior Entertainment Talent, but in this business Junior is a relative term, as it takes many years to perfect our craft. I have such respect for the new generation of filmmakers who can multi task and have such technical expertise. My putting on a triple writing/producing/acting hat at my age is me running to catch up with them’. But she thinks positive: ’Storytellers create jobs as well as inspire imaginations. Our job is to make the best stories we can within the restrictions of a business and JETS recognises that. William Peschek has achieved something extraordinary by bringing together so many distinguished jury members and sponsors, all open and willing to help JETS stories find a home’.
The undiminished attractive blonde who, after completing her studies at the University of Bristol, which she graduated with a ’Bachelor of Arts in Drama and English’ in the same year as film writer Jeremy Brock (The Last King of Scotland, 2006), got engagements at the renowned Royal Shakespeare Company (RSC) and the no less well-known National Theatre, has been acting with great versatility since 1981: For example, the warm-hearted role of Emilie Schindler in Schindler’s List (1993), who authentically saved with her husband, the manufacturer Oskar (Liam Neeson), over 1200 Jews from death in concentration camps, faced her vicious pilot Kristel as an opponent of Sylvester ’Sly’ Stallone in the Rocky Mountain action adventure Cliffhanger (also 1993). And so, to this day, political thrillers such as Opernball (1998, here she was Heiner Lauterbach’s wife) and Hunter Killer (2018, with Gerard Butler and Gary Oldman) alternate with romantic comedies (The Princess Diaries, 2001 / The Princess Diaries 2: Royal Engagement, 2004; both with Ann Hathaway) or extraordinary animal stories based (A Street Cat Named Bob, 2016).
As a scriptwriter and producer, she does not want to commit to certain topics, but like The Bay of Silence, which was shown in numerous countries during the pandemic and will probably also get a theatrical release in Germany if the infection situation continues to improve, she has preferences: ’Nic Roeg’s Don’t Look Now and George Sluzier’s The Vanishing were key references for me. Deeply disturbing films with no special effects, relying on the performances and a creeping sense of dread’. Should the next projects of her have similar qualities as The Bay of Silence, whose trailer already has the really brilliant tagline ’The clother to the truth the further he gets from reality´, we can certainly expect a lot from Caroline Goodall’s second career.
The wife of Terry Gilliam´s favourite cinematographer Nicola Pecorini (Fear and Loathing in Las Vegas, 1998; The Man Who Killed Don Quixote, 2018) with whom she has a daughter and a son, doesn’t just have a wish for herself when she speaks about her expectations of the JETS Initiative and the entire film industry in a time that is not easy for everyone who is involved: ’It’s great to see so many women directors and producers among the applicants and such a variety of subjects. I hope the rebalancing of power structures thanks to the continuing #Me Too movement helps us rewire our industry. Of the 84 projects I have worked on, 6.5% were written by women. That is way too low a percentage’. As a man, I agree 100 percent with her last sentence. We wish you continued success, Caroline Goodall!

Marc Hairapetian, founder & publisher of the culture magazine SPIRIT – A SMILE IN THE STORM https://spirit-fanzine.de