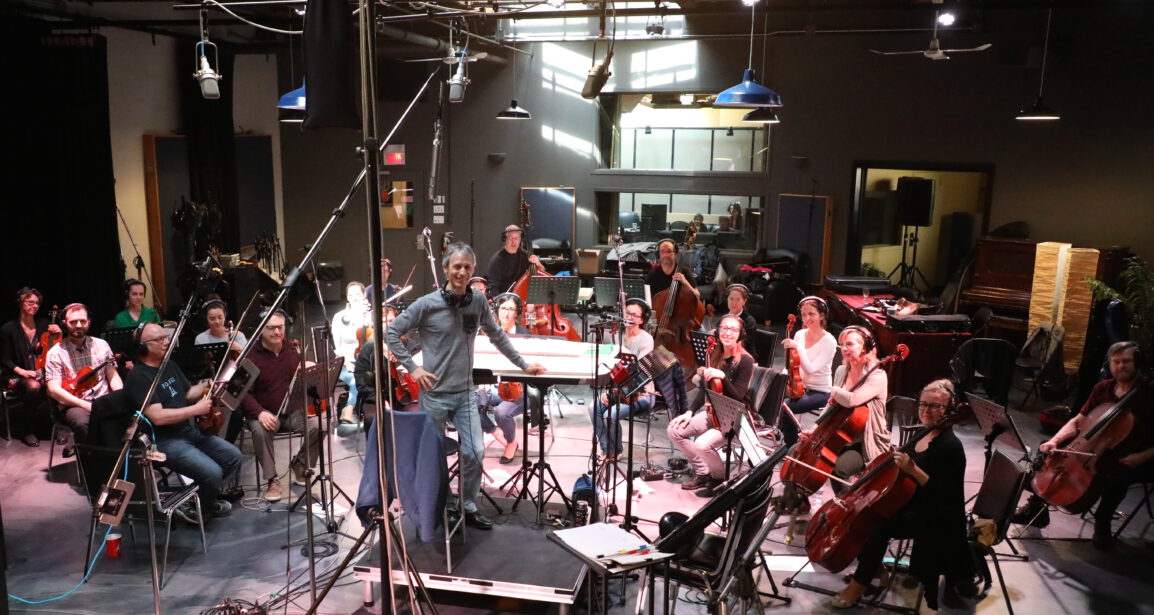 A film cannot be imagined without its soundtrack. One thinks of the zither part by Anton Karas, who strengthens the black and white play of light and shadow around an ominously glamorous penicillin slider named Harry Lime (congenially embodied by Orson Welles) in the four-sector city of post-war Vienna from “The Third Man” (Great Britain, 1949) with effective musical accompaniment. Or how Maurice Jarre used the early electronic instrument Ondes Martenot in “Lawrence of Arabia” (United Kingdom, 1962) to give the mercilessly burning sun an authoritative voice when Peter O’Toole tries to find again a local companion who was left behind while crossing the desert. Yes, sometimes the film music is even the real star of a cinema production. This is also the case with “Troll: The Tale of a Tail”!

In the literally imaginative Norwegian Canadian animation adventure for the whole family, where troll prince Trym only has three days to save his father, King Grom, who has turned to stone and robbed of his tail by the dark presence of the forest, composer Daniel Scott created a symphonic score that supports the images emotionally in the best possible way, but also offers real listening pleasure without the film, if it will hopefully be released on CD soon. The use of historical Scandinavian instruments such as the Norwegian bukkehorn, which is made from the horn of a goat, gives the whole thing a good dose of local color and authenticity despite the computer generated film material.

Daniel Scott comes across absolutely undisguised in conversation. His love for (film) music can be heard in every syllable of our Zoom meeting. While I’m connected from Hanover this time, he’s sitting in his home studio in Montreal. When I tell him that the musically best part of “Troll: The Tale of a Tail” is actually the end of the furious end-credits music, he honestly admits: “There was not enough time to create an original piece for the credits. So I created a suite for the score.” But what a suite! Here he really pulls out all the musical stops from folk songs to romantic classical music. Although he composed at home, the score was recorded under his direction at the Piccolo Studios in Montreal – luckily before the Corona era, which held the whole world in its clutches. How did he, as a Canadian composer, come up with the (film) material of Norwegian mythology and legends? “This is an interesting question. This is a co-production between Canada and Norway. Funding comes from a variety of sources, but the original concept is from co-director Kristian Kamp and writer Jørn Kolsrud, who are both also producers. I met them through the Montreal producer Jean Aubert. It was a long-term project that was launched in 2005. I only joined them in 2016.” Here the German saying comes true: “What takes a long time, will finally be good. ”

Like “The Lion King” (USA, 1994), the child-friendly film is loosely based on Shakespeare’s “Hamlet”: Trym and his companions have to embark on a wild and dangerous journey through the troll kingdom of Ervod in order to save his father’s life and to return the kingdom to its rightful ruler. With the exception of a small framework story with human actors for the Chinese (and German) market (not for the Norwegian!), all of this is clad in turbulent, atmospherically dense computer images. That’s why I ask Daniel Scott, who put his musical stamp on animated series such as “Walter and Tandoori” (2010), but also the documentary series “Montreal, mon amour, mon histoire” (2012 – 2016): Is the compositional freedom in animated films bigger than in real films? “It doesn’t matter whether it’s an animated film or a real film, which makes the score more complicated or simple. It depends more on the style. ‘Troll: The Tale of a Tail’ is an action-adventure film that generally needs more music-intensive orchestral music.” He deliberately refrained from using any electronics because there were none at the time the film was set.

At the request of the two directors Kevin Munroe (Canada) and Kristian Kamp (Norway), he created a musical sequence in advance “to animate the animators!” He would have had the “luxury” of having enough time to complete the score and the music recordings: “I worked pretty hard on it every day. I’m very organized, very structured because you have no other choice when recording with a live orchestra. To make a long story short: after the pure composing it took me about three and a half months to complete the entire soundtrack.”

The five-time winner of the “Socan Film and television award for most internationally performed Quebec composer“ no longer takes note of the sheet music – and he only sits at the piano when he plays a theme. Instead he usually composes directly on the keyboard, using the sound and instrument library on his computer, because the producers would like to hear something “almost finished” before the actual music recordings begin: “The libraries that we have on the computer today make it possible to create a beautiful illusion of an orchestra.”

“Troll: The Tale of a Tail” is also a bow to the greatest Norwegian composer of all time: Edvard (Hagerup) Grieg (June 15, 1843 in Bergen – September 4, 1907 ibid). A very forced variant of the piece “In der Halle des Bergkönigs” from the world-famous “Peer Gynt” incidental music, which can no longer be surpassed in terms of dynamics, sounds: “It was a request from Kristian. He asked me to use the Peer Gynt piece. Kristian put it there to have as much Scandinavian influence in the score as possible. And when I saw the evil character of the animated Grimma, I thought to myself: ‘It fits perfectly here.’” Extra harmonic flutes like the Seljefløyte were ordered from Norway for the musicians in Montreal. The bukkehorn players were not flown in specially; they were recorded separately. Daniel Scott, who is a big fan of progressive rock bands like Genesis and Yes and was a guitarist in cover bands in his musical beginnings, played the ukulele himself for the soundtrack.

He also conducted the musicians on the recordings for the soundtrack, which would have been a “huge privilege” for him, as many of them play in the renowned Orchestre symphonique de Montréal (OSM). However, as a conductor of one of his film scores, he doesn’t want to go on tour: “I’m a studio rat. Behind the scenes is my place. I feel good there. Not in front of a large audience.“ It wasn’t always like that: As a child he gained acting experience for Canadian television, especially in commercials, “which were all recorded in studios and not in front of live viewers”, he laughs.

When I talk about his musical role models, he literally gushes out: “It may not be original, but John Williams is definitely at the top of my list. I grew up with his work and his music for films by Steven Spielberg and George Lucas like ‘Indiana Jones’,’ Star Wars’ or ‘E.T. the Extra-Terrestrial’ are part of my growing up and very close to my ear. When I was a child, I was fascinated by the music of “Bugs Bunny” by Carl Stalling and “Tom and Jerry” by Scott Bradley. These composers probably inspired me unconsciously. Of course, I didn’t know that when I was little.” His mother was a pianist and his father a composer for commercials. Daniel Scott was born with the talent. And that’s why it’s kind of logical that his first compositions were TV and commercial jingles. Telling musical stories is very important to him “and working with the staff to make a film together”. That is why he has a dream job: “There was never a ‘Plan B’!“

Daniel Scott is not only someone who answers questions very precisely, he is also a good listener: When I told him about my friendship with three-time Oscar winner Maurice Jarre (“Lawrence of Arabia”, 1963; “Doctor Zhivago”, 1966; “A Passage to India”, 1984) or my Rome visit to Ennio Morricone, who also died last year, his eyes begin to light up: “You know a lot more about film music than I do”, he says with Canadian understatement. When asked about his favorite soundtracks, he doesn’t have to think twice: “’Lawrence of Arabia’ is one of the best soundtracks ever composed! I also mention ‘The Untouchables’ by Ennio Morricone, the very extraordinary jazz score for ‘Catch Me If You Can’ by John Williams, whose work on the first three ‘Harry Potter’ films, which my children also love, and Joe Hisaishi’s ‚Princess Mononoke‘.“ Here the circle closes for “Troll: A Magical World of Trym”, because “Princess Monokoke” was the first anime in which Cel Shading was used: the production of animations with 3D computer animation that is then rendered to look like 2D animation.

With so much talent, Daniel Scott doesn’t want to conquer Hollywood after the difficult order situation in 2021 (“In contrast, 2020 was gold despite Corona because many films had already been shot and only had to be set to music!”)? “To be honest, I’m just getting started and ‘Troll: The Magical World of Trym’ could be the start of my career there.” It is certainly helpful that his compatriot, director Kevin Munroe, already lives in Los Angeles …

An hour of talking shop with Daniel Scott quickly went by. He smiles mischievously like one of the lovable trolls from the film and confesses: “We could probably talk about it forever!” To be continued is guaranteed!

Marc Hairapetian has been the founder and publisher of the culture magazine Spirit- A Smile in the Storm https://spirit-fanzine.de since1984.