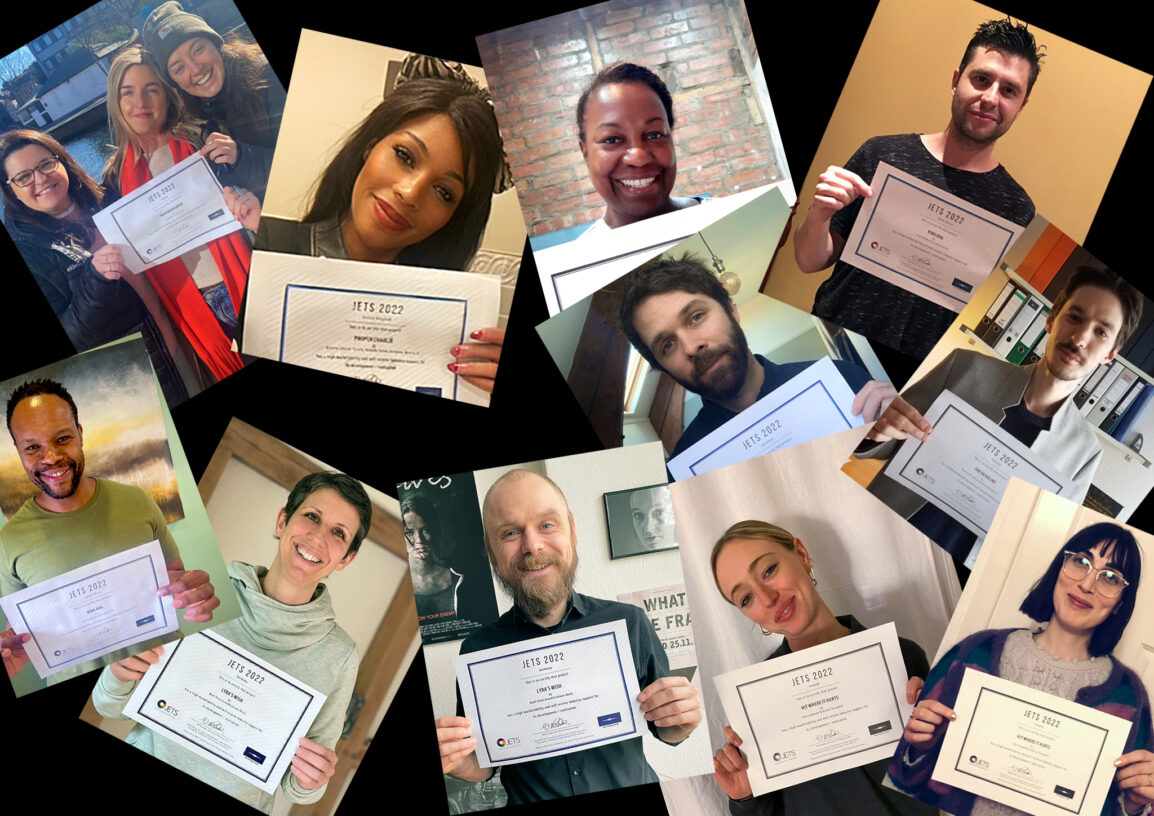 The example of director Claire Byrne and producer Jo Halpin from Ireland, who competed with the psychological thriller “Duck Duck Gosse”, shows just how much the expert discussions and jury evaluations within the framework of the JETS initiative can drive a film project forward: They felt like Sheriff Brody in Steven Spielberg’s classic “Jaws”, who realises in amazement: “We’re going to need a bigger boat!” The JETS talks were “extremely helpful” and “supportive”. “But at some point we both looked at each other and said: we need a bigger budget!”, producer Jo Halpin tells us. “Duck Duck Goose” is set as a minimalist chamber play in which Greg and Holly’s romantic weekend is interrupted by Greg’s ex-girlfriend. The short holiday for the three of them turns into a horror trip full of “mind games” and psychological warfare.”We wanted to set up a European co-production from the very beginning and realised in the course of the JETS talks that our 1 million euro budget would not be enough if we wanted to make a quality feature film,” explains producer Jo Halpin. As a result of this realisation, they now want to approach Ireland’s national film funding agency “Screen Ireland”. Director Claire Byrne is counting above all on a strong cast: “We need good actors and actresses for our project to have its full effect.” The JETS Talks have given her hope, “because practically everyone was enthusiastic and keen to see our ideas on the big screen.” Receiving one of the JETS Awards was a “booster” for the project, she said.

The encounters at JETS were also an “eye-opener” for director and screenwriter Roisin Agnew from Ireland. Her thriller “Hit Where It Hurts” is about Lucia, a birdwatcher and lecturer who is obsessed with the climate apocalypse and therefore decides to terrorise a government minister. But something goes wrong in the process and she is forced to seek refuge with a commune on the fringes of society. “What amazed me most about pitching was that at a certain point people drop out of the plot and are less interested in the progression of the story and more interested in the setting, the mood of your film,” Agnew tells us. “We’ll take that into account in the future when we look at moving forward.” Director Agnew presented “Hit Where It Hurts” together with producer Roisin Geraghty. Never did the pair expect to scoop an award at JETS, as – according to Roisin Agnew – they had prepared a “lo-fi pitch” that “only” featured talking heads. “But pitching is not just about impressive effects or stirring trailers,” says Roisin Agnew. “The personalities behind a project and their passion for it are just as important.”

Director-screenwriter Brad Katzen and producer Tumisho Masha, on the other hand, presented a flashy pitching trailer full of action and drama when they introduced their martial arts thriller “King Dog” at the JETS Talks. Set in the brutal world of illegal street fighting in South Africa, a maimed fighter must wriggle out of culpable dependence on a ruthless fighter – all because he stood by a woman in a moment of weakness… Jean Claude van Damme classics like “Bloodsport” and “Karate Tiger” are the inspiration for this unusual action package, which aims to showcase a different traditional African martial art in every single fight scene. “The award at JETS showed us that King Dog has international potential – and that’s exactly what we were hoping for,” says Brad Katzen. “Martial arts in African, whipped forward by a pulsating hip hop soundtrack – that went down extremely well with almost all the contestants and jury members,” Katzen enthuses. “Everyone realised that we really have a vision that we strongly believe in.” What he would like to see after JETS for the film project he has dreamed of since childhood? “To get money for the production!”, Bradely Katzen answers as if shot out of a pistol.

For director and screenwriter Veronica McKenzie from Great Britain, the JETS Talks and the award have given her project “Proper Charlie” an “enormous boost”: “The exchange with international experts confirmed to us that our story can be sold worldwide and transports values that are universally understood,” says McKenzie, who pitched “Proper Charlie” together with producers Natalie Yesufu-Edwards (Great Britain) and Yolanda Torres (Spain). The Feel Good adventure tells of the adventure journey of retiree Charlie, who is drawn back to his roots in the Caribbean in retirement. So he embarks on a long boat trip to the south, but in the process he not only notices that his granddaughter Denny has secretly smuggled herself on board – but also that feelings of home are not necessarily tied to a place. The plot is based on the true story of her stepfather, Veroncia McKenzie reports. “And that’s why it’s particularly close to my heart to bring his experience to the big screen.” The production concept is in place, she says, with much of the film’s action taking place on a boat. “That’s why we’ll be using a lot of green screen technology, but also incorporating original locations,” McKenzie says. “After JETS, we are now hoping to start production next year.”

The two German winners of this year’s JETS initiative also emerge stronger from the pitches and talks: “Pitching events always lead to networking, and it’s great to exchange ideas with like-minded people,” says director and producer Juliane Block from Hanover enthusiastically. Together with screenwriter Wolf-Peter Arand, she presented the Christmas Adventure Movie “Lyra’s Wish”. “JETS has helped us this time especially in terms of evaluating transnational productions. We have several ideas where we can now look for more European co-production partners!” In “Lyra’s Wish”, after a family quarrel, 11-year-old Lyra goes to a mystical Christmas dream world where she encounters numerous strange creatures, including the demon Krampus, the gnome Tomte and the child-eating giantess Gryla. Her adventurous journey changes Lyra’s idea of the spirit of Christmas forever. “We wanted to take a completely different approach to the genre of the Christmas film and use less of the old familiar US myths and instead let universal Christmas tales have their say,” reports screenwriter and co-director Wolf-Peter Arand. “With JETS, several opportunities arose to move the project forward.” So the plot was rewritten and refined again without further ado after the JETS talks. Juliane Block: “We hope to be able to start shooting Lyra’s Wish as a European co-production in 2023 at the latest.”

For the black comedy “The Deadline”, which was awarded one of the coveted JETS Awards as a German-British co-production with the participation of Sternenberg Films based in Wiesbaden, the prize also means another step in the development of production: “We learned a lot about international financing and co-production. About what is realistic and what is not realistic. About budget ranges, financing and pre-sales,” says producer Konstantin Korenchuk, who presented “The Deadline” together with screenwriter and director Mark Waters and co-producer Simon Pilarski. “Now we hope to have discussions about further steps and about details of an international co-production.” In the macabre science fiction comedy “The Deadline”, the main character Larry Spitzfart ends up in a kind of business prison camp that is a parody of the excesses of capitalism: Anyone here who does not develop a promising business plan that yields at least $100,000 in profit must die! “The decisive advantage of the JETS initiative for us was that the participants and conversations were all at a very high level, without exception,” says producer Konstantin Korenchuk. “That spurs us on and gives us courage. Thank you very much, JETS!”