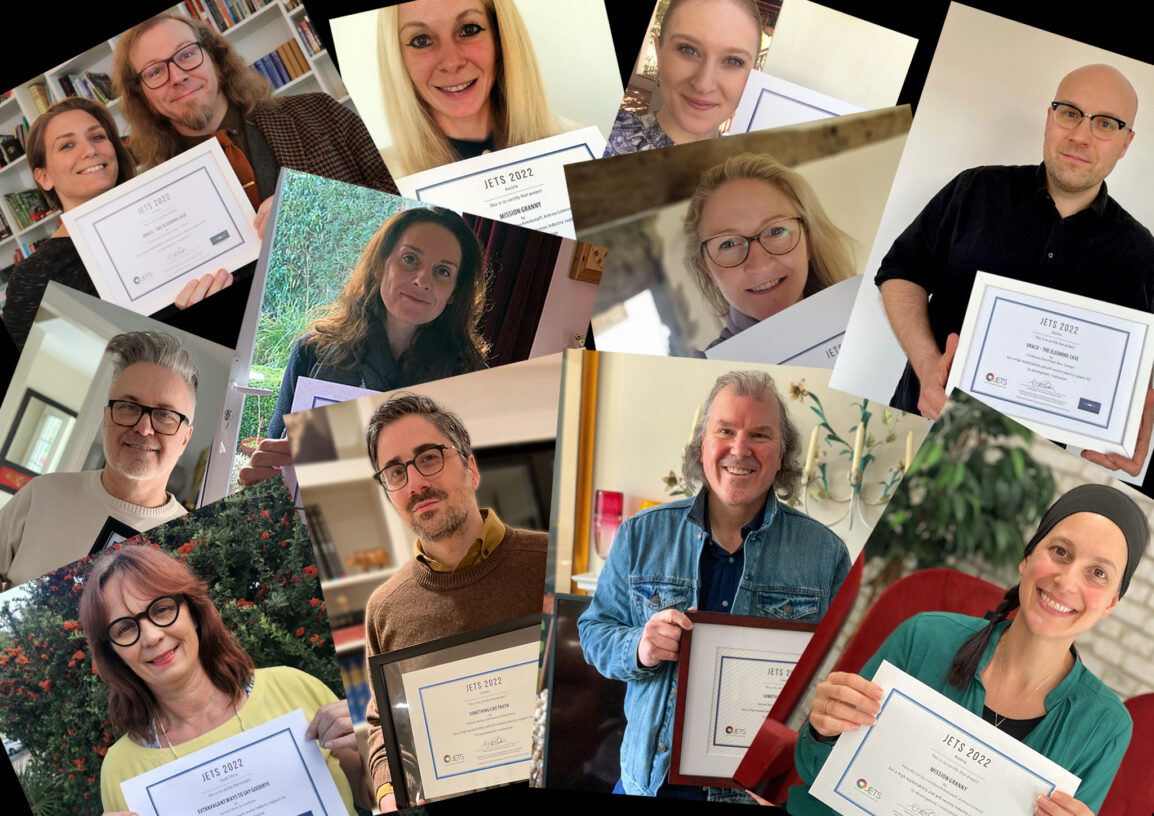 “It’s always nice to be a winner!” says director and screenwriter Jo Southwell in our Zoom interview, delighted about the first place for her film project “Loyalty” and the United Kingdom of Great Britain and Northern Ireland in the JETS Initiative 2022. Her producer Rachel Gold adds with a pinch of self-irony: “Before, you’ve asked yourself many times: ‘What am I actually doing here?’ But with every work on a film, you also produce your own stories. Winning at JETS is one of them for us.” Jo has already directed twelve short films, including three episodes of the TV series “Doctors” (all 2022). “Loyalty” is now set to become her first full-length feature film. For Rachel it is already the second. For Jo, who was born in Northampton but has Irish roots, it is “far more than a typical action gangster thriller” through the female gaze of the protagonist, a young sports teacher who was once involved in criminal activities through her family, which now catch up with her when her eldest brother is killed by an underworld kingpin. It is also a family drama in that it is about values such as cohesion, honour and the titular loyalty. She finds the exchange with other cineastes as well as the world distributors and funding agencies “inspiring” in the difficult times of the pandemic with primarily video conferences. Rachel then almost takes the words out of her mouth when she says: “In the end, we all want the same thing: to make a film and send it out into the world!”

This worthwhile goal has also been set by “Capra Film” from Vienna with “Dracu – The Eleonore Case”. The young production company is increasingly targeting horror films in 2022. In addition to the already shot “Family Dinner”, which was directed by “Dracu” co-producer Peter Hengl, “The Eleonore Case” follows in the footsteps of William Friedkin’s world success “The Exorcist” (1973). In contrast to the US symphony of horror, which was even nominated for “Best Film” at the Oscars and redefined the genre visually and verbally in its drastic nature, the film is based on a real case: the exorcism of a twelve-year-old Romanian girl by the first female parapsychologist (and astrologer) Countess Zoe Wassilko von Serecki (* 11 July 1897 in Czernowitz; † 26 November 1978 in Vienna). Born on 5 November 1982 in Waiblingen, director and screenwriter Marc Schlegel, who once studied at the Vienna Film Academy, actually comes from a comedy background. For him, this was no obstacle, because opposites attract: “I literally stumbled into the historical figure. When I heard about the authentic case, I was electrified: ‘This has to be a film! So far, apart from the two equally funny feature-length films ‘Schmidt’s Cat’ and ‘Summer on Three Wheels’, I have mostly done sitcom TV formats like ‘Meine heile Welt’ with Michael Kessler on ZDFneo, but comedy and horror are two genres that are not all that different when it comes to staging: They both require a very workmanlike approach and want to trigger a direct reaction in the viewer: To laugh here, to be creeped out there.” “The Exorcist”, which would still “shock” you after almost 50 years, would of course be a big influence as well as two masterpieces of the horror new wave: Robert Eggers’ “The Vvitch: A New-England Folktale” (2015) and Ari Aster’s “Midsommar” (2019). How did he, Lola Basara and Peter Hengl of Capra Film, who want to stand for “sophisticated genre cinema with an Austrian identity”, come across the application to JETS in the first place? “This is the first time Austria has taken part, so the Austrian Film Institute drew attention to it in its newsletter,” he enthuses, “‘Dracu – The Eleonore Case’ is Capra Film’s second production and my third feature film. So the JETS initiative is made for us!” Does he also believe that the first place for Austria will really push the project? “Absolutely. In any other industry, it’s helpful to have professionals looking at a project. Promoters and world distributors are exactly our contacts thanks to the JETS platform!”

Speaking of the Felix Austria Awards: Second place went to the animated action comedy “Mission Granny”, which will now also bear the international title in its country of origin for cinema, DVD, Blu-Ray and VoD exploitation instead of “Operation Granny”. “We’re all about portraying a different kind of granny,” finds Loredana Rehekampff, “Usually in animated films grandmothers are always sweet and a bit boring, in ours she’s such a real ‘bad ass’ character with purple hair, a pipe and a trench coat.” The “smorgasbord of funny ideas” including a spy story with a chase through Vienna in a hackney carriage, including a detour into the sewers with the sound of the legendary “Harry Lime Theme” from the noir classic “The Third Man” (1949), should help the genre of animated films – which is still underdeveloped in Austria except for “Rotzbub -Der DEIX Film” (2021) – to get off the ground. What is planned is a real zither party with the seal of quality “mainstream family entertainment at its best”. That’s why it was decided early on to work together with the Viennese 3D animation studio Arx Anima. Their co-founder and CEO Dunja Bernatzky returns the jury’s praise for “Mission Granny” to JETS: “It’s nice to have such recognition and also the opportunity to get international support from the industry! We hope for an interesting exchange with experts and look forward to support!” Which country as a co-production partner is preferred? Maybe the “Big Brother” from Germany? Dunja: “Personally, we don’t have any preferences; the parameters are rather determined by funding, technical possibilities and talent.”

Liese Kuhn also has the latter in abundance, landing second place for South Africa with “Extravagant Ways to Say Goodbye”. And that on her 27th birthday! Via video link from Cape Town, her cheerfulness is infectious. The daughter of a pastor of a Protestant Methodist church, she has German roots through her grandparents. Her sister has the pretty name Heidi. Liese’s favourite thing to watch is tragicomedy, so she wants to make one herself. The view of a young girl plagued by mortal fear, who nevertheless bravely stands her ground with humour, on a world that has come apart at the seams is thus more topical than ever, especially in our day and age, when the Covid 19 pandemic is still giving people around the globe a hard time and now the Russian invasion of Ukraine has caused international horror. “I was also afraid when I submitted to JETS,” admits Liese now, laughing liberally, “… namely that my film title would be far too loooong.” Fortunately, this fear was unjustified. The jury immediately recognised the potential of her story, which is peppered with (unintentional) situation comedy and in which even the most terrible events, such as her mother’s cancer, are embedded in exhilarating sequences. After all, there is so much heart in the comedy of life’s tragic circumstances: a laughter that overcomes death and turns to life. JETS was a “wonderful experience” for her, where she was able to make new friends from all over the world while pushing forward with her film project.

While we are on the subject of the noble concept of friendship: Sometimes the spark jumps from the interviewer to the interviewee and back again. In the case of Jim Donovan, for example, the set interview time of the video call triples. That’s what happens when two die-hard cineastes talk, first about the pitch for “Something Like Truth” presented at JETS, which won the race for first place for Canada, then about favourite films in general. His complex chamber play about a police investigator whose world collapses in a single day in the three interrogation rooms where he usually pesters suspects with questions because his colleague has shot a black child during an operation and he learns from his daughter that his own wife is cheating on him, triggers a lot of thought games from the synopsis alone. For example, the author of these lines imagines the film as a noir drama filmed in black and white, while for Jim “only colour is an option”. Now that he has won, he wants to use the “momentum” to develop the project. He is pursuing two strategies: Either Telefilm Canada will be impressed by the first place, in which case the film could be shot very soon. Or, if it should turn out to be a co-production as a pure independent film, he could also “travel to Berlin, Budapest or Cape Town” with his sworn team from the far north of North America to realise the film. In the end, all he needs is a location with three rooms that can be built in any studio in the world. When asked about his film favourites, he groans: “You’re killing me right now! Actually, that’s impossible to answer.” Speaks it and still names three films: “8 1/2” (1963) by Federico Fellini, (“Just because of Nino Rota’s music!”) “The Revenant” (2015) by Alejandro G. Iñárritu as a “true masterpiece of the adventure film” and “any film by Steven Spielberg, no matter which one, because his films have accompanied my life since my youth and he is the best at telling a commercial story in a sophisticated way”. Is there his common thread in the criteria for his favourite films?  “I have to respect them formally because I’m a filmmaker myself, but the only way for me to get into a film is for it to speak to me spiritually or emotionally.” His big wish is that he can be at the Berlinale 2023 again live and then either with the finished film or as one of the alumni at a JETS initiative that will take place physically again. Welcome to Berlin, Jim!

So the paths to cinematic fame are very different. But as the actor of the century Kirk Douglas, who died in 2020 at the age of 103, so aptly said as the French Colonel Dax to his soldiers, barely able to get out of the trenches due to enemy fire, in Stanley Kubrick’s anti-war drama Paths of Glory (1957), which still shakes us to this day: “If anyone can take the high ground 19, it’s you!” (The original refers to the intrinsically impregnable “ant hill”.) In our case, “height 19” or the “ant hill” has already been overcome for the first and second winners of the JETS initiative!